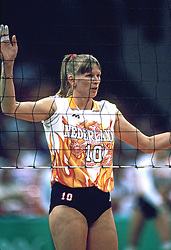 Henriëtte Weersing, born at October 11th in 1965, starts playing volleyball at the age of almost 16 years old, after many years  being into gymnastics.  In less than 3 years she climbed up to the highest division in The Netherlands, playing for the club team Avero/Olympus in Sneek. With this club she won five national cups and six Dutch championships titles. During her last year in Sneek she qualifies with her team for the Final Four of the Champions League and during these finals she received the award for best attacker.

One year later, in 1992, she started her international career and she moved to Italy and starts to play for Olimpia Teodora Ravenna. She played in Italy for teams in Ravenna, Modena, Bergamo, Naples, Vicenza, Jesi and Reggio Emilia. After 12 years in Italy she ended her career  in Spain where she played for Hotel Cantur Las Palmas(Gran Canaria).

At club level she won all the possible cups. Three Cups for the national cup winners, 1 Cev Cup and 1 European supercup. In 1992 she won with Ravenna the Champions League and received the award for  MVP of this Final Four.
A year later, again with Ravenna, she won the World Championships for club teams and was awarded as best attacker of the tournament.
With Bergamo she won the Italian Supercup and the Italian Championship.  Henriëtte received many personal awards during her career, including two times  the prestigious “ Trofeo Gazzetta dello sport”.

In 1985, 3 months after her debut in the highest division in Holland, she was invited to play for the Dutch national team. Besides some interruptions for injuries, she ended her career with the national team after 16 years,  playing almost 300 caps. She has been one of the most valuable players in the history of  the Dutch National Team.

With the Dutch national team, she was a silver medalist at the European Championships of 1991 and a gold medalist at the European Championships in 1995. She played with the Dutch national team at the Olympic games of Barcelona in 1992 where they finish at a 6th place and again in 1996 in Atlanta where they ended the tournament at the 5th place.

In 2004, Henriëtte ended her volleyball career and started to work for the two major Italian broadcasters, Sky and Rai, as live technical commentator during the Italian Championships (women) and all the Champions League games in Italy.

For about 13 years Henriëtte collaborates with Eurocamp Cesenatico, a large Italian organizer of summer camps for various sports, where Henriette was responsible for volleyball.

Henriëtte speaks 6 languages (Dutch, Italian, English and Spanish fluently besides German and French) and she is a freelance translater.